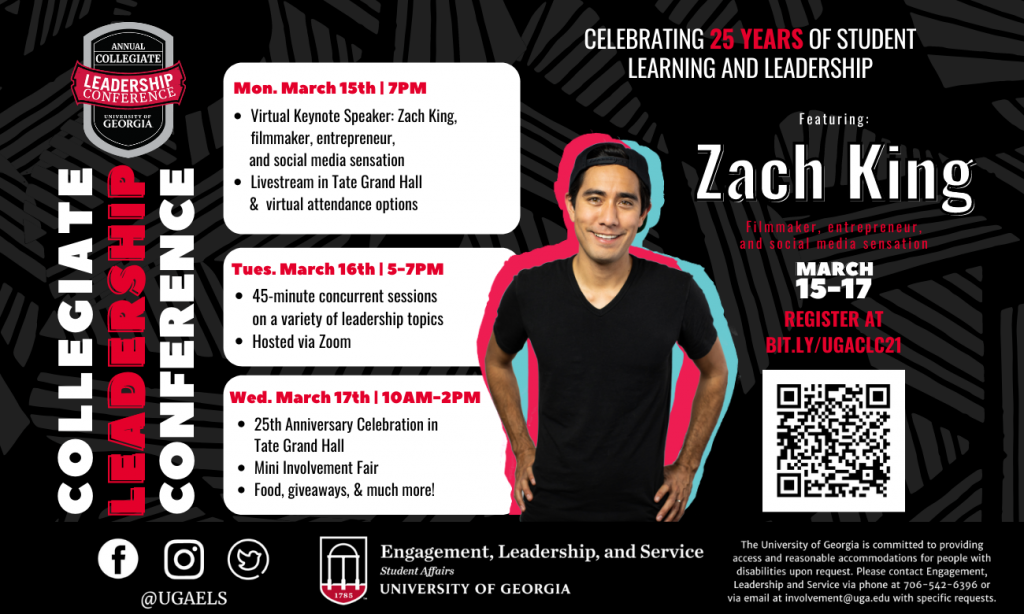 Questions about Collegiate Leadership Conference can be directed to ugaclc@uga.edu.

About the Virtual Keynote Speaker

Zach King – the LA based filmmaker known for his clever magic tricks and “digital sleight of hand”, is one of social media’s most prominent content creators. With a combined social reach of over 75 million followers, Zach’s magical content has delighted fans all over the world. Zach has been featured on Good Morning America, Adweek, and People. His company, King Studio, has partnered with brands such as Disney, Apple, Nike, Coca-Cola, and many others. Recently, Zach has expanded onto the TikTok platform, where he has seen incredible growth. At over 50 million followers, he’s currently the third most followed account in the world.

About the Virtual Presentations

Join us for 45-minute presentations on a variety of leadership topics. Sessions will take place via Zoom at 5pm, 6pm, and 7pm on Tuesday, March 16, 2021. Pre-registration required in order to gain access to the Zoom links.

About the 25th Anniversary Celebration

Join us as we celebrate the 25th year of Collegiate Leadership Conference! Drop-in on the celebration in Tate Grand Hall on Wednesday, March 17 from 10am-2pm. WUOG 90.5FM will be DJing, there will be a mini involvement fair highlighting campus leadership opportunities, free food, and more. Interested in promoting leadership opportunities within your registered student organization? Visit the Involvement Network and sign up to table. Students who attend the keynote (live-stream in Grand Hall or via Zoom) and attend at least one virtual presentation will be eligible to receive a free t-shirt. 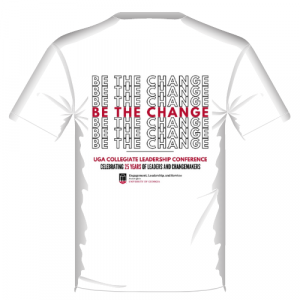 Is there a registration fee to participate?

Do I have to participate in all CLC experiences?

You can participate in as much or as little as you are able. Students who attend the keynote (live-stream in Grand Hall or via Zoom) and attend at least one virtual presentation will be eligible to pick up free t-shirt!